Intumescence was observed this week on greenhouse tomatoes. Intumescence is an abiotic disorder which produces small blisters on leaf surfaces. Severe cases can result in defoliation. Certain plants are especially susceptible to intumescence; these include members of the Solanaceae such as Ipomoea, peppers, and tomatoes, as well as Cuphea and Thunbergia. The symptoms resemble and are often mistaken for edema, but their development is distinctly different.

The location of the symptoms is helpful in distinguishing intumescence from edema, as is the genus of the affected plant. Edema is commonly observed on the undersides of leaves, whereas intumescence usually appears on upper leaf surfaces. Ivy geraniums are susceptible to edema, which is caused by an imbalance in water relations in the plant. Edema on ivy geraniums is best avoided by selecting resistant cultivars. 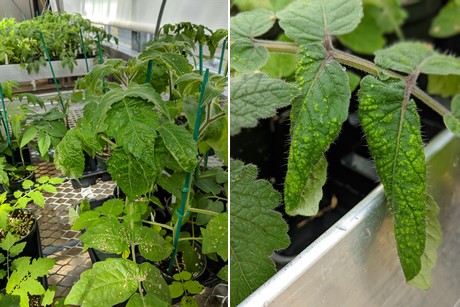 Symptoms of intumescence may also be mistaken for galls formed by eriophyid mites; however, mites will be absent. While intumescences may appear in a pattern, distribution of mite galls is more random. 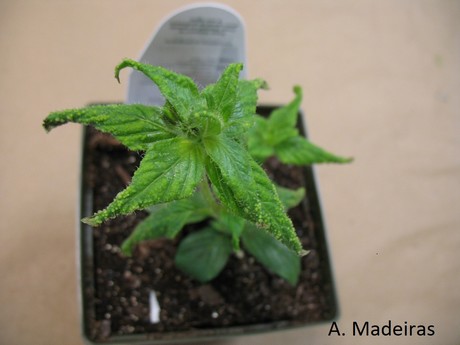 Research from Kansas State University has suggested that intumescence is caused by decreased UVB radiation, a condition that may occur as a result of a long stretch of cloudy weather, or the application of shade cloth or other material that blocks UVB radiation. Symptoms are nearly always seen in greenhouses or growth chambers. Rare cases have occurred outdoors. Recommendations thus far for preventing intumescence are limited to spacing plants to allow full light exposure. Some cultivars of a species may be more susceptible than others, though little information about this currently exists for plants other than Ipomoea.