According to Dutch green courgette grower, Mart van Uffelen, April is the month when things happen. Certainly for the courgette fleurs, he has also been harvesting since 2015. On 20 January, he planted the 1.2-hectare greenhouse. Harvesting then started in mid-February.

Prices have not been great so far. Over the last few years, this is something Mart has come to expect for the green courgettes. However, especially for the courgette fleur, it is disappointing. "I was counting on higher demand," he says. 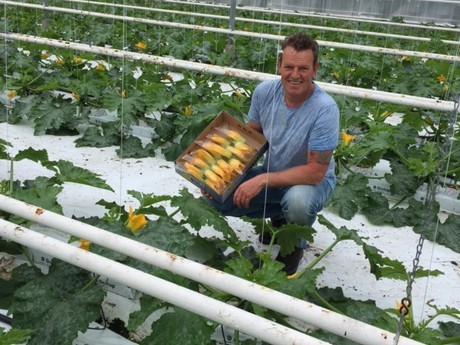 In the Dutch town of ’s-Gravenzande, where Mart farms, the first courgette fleur announced the start of the season in mid-February. "Back then I received reports that the Israeli courgette fleurs were no longer of the best quality. And that people were happy with the Dutch supply. However, it turns out that once I had them available, they did not sell very well."

Harvesting flowers
Courgette fleurs are, according to Mart, a minor product. As a grower, you should not expect there to be a lot of demand for this all at once. "We are talking about, on average, roughly 8 to 15 little boxes per day. If you are lucky, this number can rise to 40. Three farmers offer this product. Each of them has their own clients, especially in the catering industry."

When it comes to courgette fleurs, freshness is even more important. This can quickly cause considerable stress for growers, according to Mart. "You prefer to be clear about the day's demands early on already. Then you can harvest the flowers early when they are nice and hard and open. Once the sun is up, the harvest becomes more difficult. It remains a good product but one you, as a grower, cannot solely rely on. If this is what you want to do, you are guaranteed to be disappointed."

Green courgettes
When it comes to green courgettes, the Spanish supply has a major influence on the market. “The Spaniards continue until June and are starting earlier and earlier. However, recently, a lot of product has been coming in from Belgium too. This means the prices are lower than you, as the farmer, would like them to be."

As a result, things are difficult for greenhouse courgette growers. "Understandably many farmers switch to the yellow variety. I do not want to, but I understand why my peers do. If a grower were to start cultivating green courgettes now, he would not make a success of it. That is the point it has gotten to, in my opinion. You simply need a certain customer base. In that regard, the market is fairly evenly divided already."