"First harvest of organic TOVs a little early this year"

Last Friday, the first organic TOVs were harvested at Tabos Eco in Vierpolders, the Netherlands. Slightly earlier than last year since they were also planted earlier. "We are, after all, connected to the geothermal heat. That helps a little with the distribution of labor," explains this company's Manager, Sjaak van Spronsen.

In the coming weeks, these tomatoes will be followed by yellow and red bell peppers as well as other tomato varieties. "We planted those tomatoes instead of truss tomatoes. We had two lean years with those, price-wise." 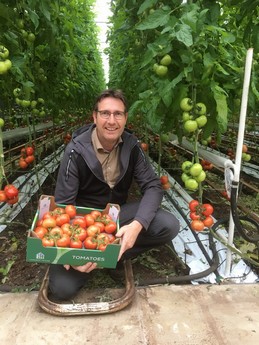 In 2017, this 8.2-hectare nursery switched entirely to organic cultivation. These past few months have been challenging for Dutch growers. There were times of very little light. Still, Sjaak is quite satisfied with the plants' growth and setting so far.

"When you have gloomy weather, you must steer the plants, as well, as you can, toward what light you have. You do not want to overheat things to want the cultivation to gain momentum. If you want to make it through to mid-November, you must take things easy."

Photo: Sjaak with truss tomatoes of the new Vitalis variety, Chelino. Jongerius Plant Nursery supplied the plants. They were planted into trays on 12 December and went into the ground on 20 December.

"This variety is somewhat larger than its cousin, the Codino, which we used to have. It also has a nicer overall color. Mildew and Cladosporium fungus resistance is important to us. This is because the number of disease-fighting resources is limited in organic cultivation."

More supply needed for retail to switch to domestic bio-products
Not much can be said about the market situation for local organic truss tomatoes when it comes to price. "Really, this market still needs to be created. There is still a lot of overseas product being offered. There must first be more supply of Dutch organic product before the retail sector makes the switch, " says Sjaak.

"Usually, prices at this time of year are around EUR2 to EUR2.5 per kg. With the current low production volumes, this does not really make a dent on an annual basis. The prices you get in the summer are far more important. Production is then also five times higher."

Sjaak hopes this will be a better year for organic truss tomatoes than the last two. When it came to prices, these were, after all, on the slim side. "Truss tomatoes have been the most difficult product to cultivate for two years in a row now," he says.

"This is if you look at the sales side. These low prices are also why we switched products. This year we have planted 13.500 m2 fewer truss tomatoes. Instead, we are now also cultivating Roma cocktail tomatoes as well as snack tomatoes. This is in addition to the Chelinos.”