At the beginning of February it appeared as a simple, short announcement on the website of real estate agent Vollebregt-Barten: "Sold: organic greenhouse horticulture company in IJsselmuiden". However, there is a whole story behind that statement. Aldo van Os, because that is of course the grower linked to the announcement, stops after 30 years as a grower and will continue as a coach of (organic) growers. "For a number of years I have been thinking about doing more in the field of coaching." 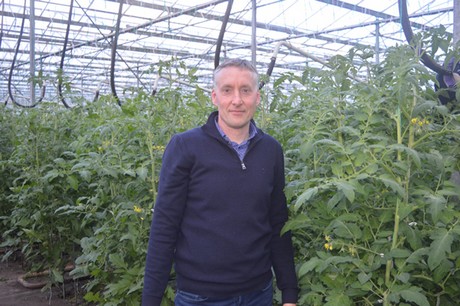 Aldo has transferred the 2.5-hectare organic nursery to the ‘neighbors’, the Gebroeders Vahl. As Organic nursery Vahl, they will continue to grow organic tomatoes. “André Vahl has been growing cucumbers conventionally for years. When he visited me in the garden, the specific smell of organic growing in the open field reminded him of the past. It made him long to grow organically too. When I put my company up for sale, everything was arranged rather quickly.”

Advisory role
Although Aldo stops as a grower, he will remain involved as an advisor to his former company. Just like his employees, who will remain active at the company at the request of the Vahl brothers. "Over the years I have developed a specific method of organic cultivation with high yields per square meter, but also with a self-developed method of biological control that has since been taken over by various other growers."

Sharing knowledge with (organic) growers
In the coming years, Aldo will be supervising the switch for growers from conventional to organic cultivation methods. “In fact, in recent years I have already combined that role as a coach with my own cultivation company. For example, a conventional grower in central Netherlands has switched and I am currently also helping a large Canadian grower to improve their organic cultivation method, including management and everything that has to do with running a greenhouse horticulture business.”

More about his role as a "switch coach" and the transfer of his knowledge to (bio) growers will follow in a second article about his new partnership The Conscious Farmer.