“The entire production process is centred around people”

Before the first harvest robot drives through the greenhouses, millions of cucumbers will still be manually picked. However, robots are already working in packing and sorting. Beltech is one of the companies focused on the development of a harvest robot, but the company has already delivered a packing robot as well. 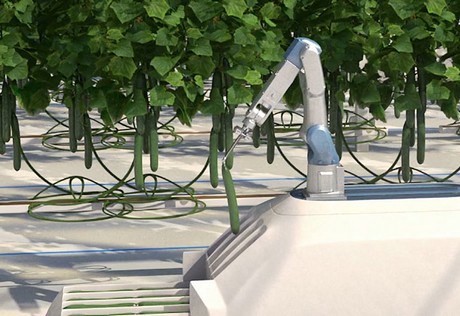 Years ago, the Dutch company from Eindhoven and part of One of A Kind Technologies, was approached to develop a cucumber harvesting robot. This project didn’t get off the ground because of changes from the client, but the researchers of Beltech didn’t disregard the idea. “On the one hand, the sector is conservative, you first have to show what you can do and how you fit into the current business. On the other hand, decisions can quickly be made when you show what you can do,” Richard Vialle, CCO and co-founder or One of A Kind Technologies, describes his experience in the sector. 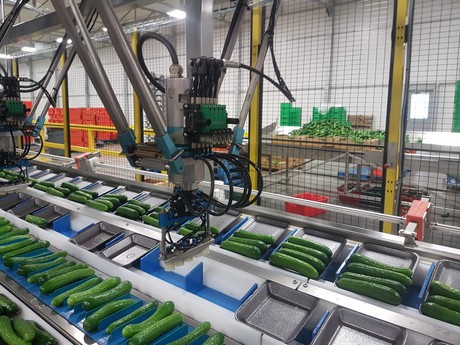 Scarcity on the labour market boosts robotisation
“The entire production process is now still centred around people,” Richard continues. Because of that, the harvest is always irregular, while the market is asking for increasingly uniform products. Besides, growers, just like in other sectors, are confronted with a dual challenge regarding workers. Firstly, there’s a shortage of employees, secondly, labour is becoming more expensive. Robots could be a solution.

Interest in robots, which can be used in various stages of the supply chain, is growing globally. “In North America, the fields are larger, as are the volumes. That makes an investment in robots more interesting,” Richard explains. “Due to the scarcity on the labour marker, growers are thinking about robotisation. In Canada, the minimum wage has gone up as well.” Companies want to scale up to 24-7 production, hygiene requirements are becoming stricter, track & trace is becoming more important, and zero tolerance is the new standard. “We’re also talking to agriculturalists a lot. They would like to know how to make a crop suitable for robotisation, genetically.” 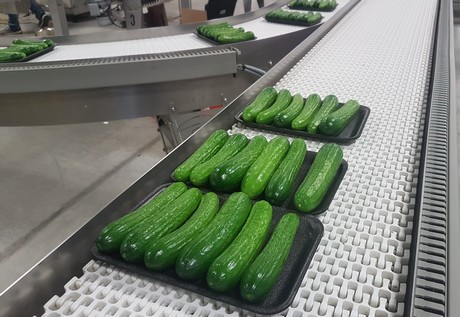 Harvest robot the future?
“Right now, you need 120 workers during the peak of the harvest of 10 hectares of cucumbers in greenhouses,” Richard exemplifies. “With harvest robots, 20 to 25 workers are needed to harvest that same greenhouse. But he sees more advantages: the risks of viruses and moulds brought into greenhouses by unsuspecting workers becomes smaller. Because of that, fewer pesticides are needed. “That means costs go down, production becomes more sustainable, and turnover per square metre goes up.” With the data gathered by the cameras and sensors of the robots in the greenhouse, growers can make harvest predictions, for example.

But that’s still in the future, right? “We built a prototype to test the system,” Richard says. Sensors make a 3D scan of the plants, so that the system has a good image of the branches, leaves and mostly the cucumbers. The robot was developed for high-wire production in modern greenhouses. Using a heated blade, to prevent infections, the robot cuts the cucumbers from the plant. “This prototype was based on machine learning, which means that the more often the robot harvests a cucumber, the better it becomes.” When the sensors detect a defect, the grower is notified. The robot then remembers how the grower wants the machine to respond.

“It will be two years at least before we can commercially market this robot,” he continues. “It’s still in development, and we’re still looking for parties to help us with financing.” The origin of Beltech is in vision technology, and the company now has several decades of experience in this. After the takeover by One of A Kind Technologies, focus shifted to three sectors: food, packaging and pharmaceutics. “We want to work with partners in those markets who have, for instance, experience building machines. We don’t need to reinvent the wheel.” 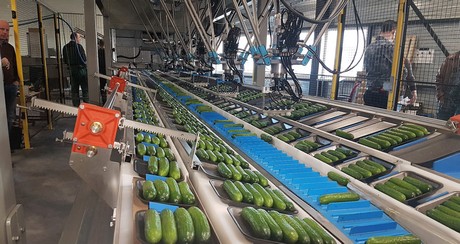 Robot packs snack cucumbers
About six months ago, a packing robot for snack cucumbers was set up in Canada, or rather, six robotic arms that, combined, are good for 20,000 snack cucumbers placed on trays per hour. “The robot sees how the cucumbers are placed on the belt, picks them up and puts them on the tray,” Richard explains. The robot keeps the requirements of the customers in mind for that, and the trays are filled with uniform products. “With the individual handling of our robots, we can mimic what people are capable of. For this project, the company worked with Christiaens Agro, specialised in sorting and sealing cucumbers, among other things.”

The machine has been operational every day since June 2018. In the short term, the software will be updated with a new algorithm. “Because of that we can achieve better results with the same input,” Richard explains. Besides, the software is equipped with a function that enables the system to indicate when improvements are possible. “The next step is internally sorting at high speed,” he looks ahead. 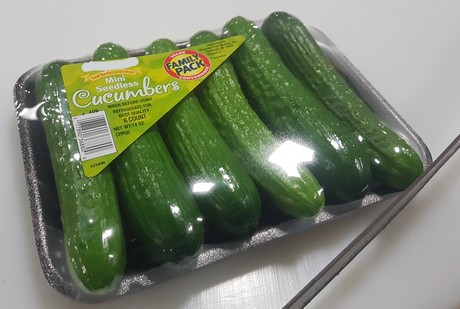 The company is currently working on a robot for products with similar shapes. For example, long cucumbers, courgettes, aubergines and corn are an option. “We started with cucumbers, because it once started with someone asking about a cucumber robot, but the step towards other greenhouse vegetables like bell pepper or tomatoes is smaller.” That’s the case for both the harvesting and the packing robot. “We can reuse a lot of techniques, but we’d naturally have to adjust the robot and the software to the product.”