Three layers of green plants, carrying red fruits under pink lights. Last year we already gave you a preview of this LED multilayer growing system developed by Parus, now the moment is here to share extra insight on this system. “We have a version hanging on the greenhouse – but since the weight can be too much for a greenhouse structure, we’ve also developed a single standing system. The results are all the same: the amount of plants can be tripled and cultivation can go on year-round.” 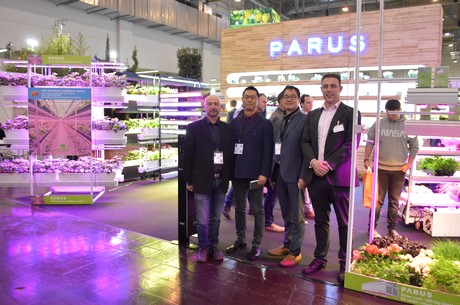 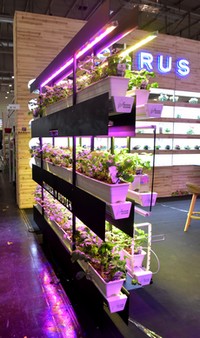 Hanging or standing
Parus therefore invested in developing a multilayer strawberry system. The hanging system can contain multiple layers and since the distance can be adjusted, the plant density can be optimized during the season. In the system obviously the Parus LED grow lights are being used. “The fact that they’re watercooled and have a 240 mmol intensity is what makes the best solution in many crops these days”, Sandro explains. “We use the most efficient LED wavelength for strawberry and the LEDs can be adjusted on each floor.” The brackets and the watering system is designed by Meteor Systems, providing a high-quality solution optimized for the strawberry plants.

However, there was one challenge for this system. The hanging system, giving space up to three layers of strawberry plants, is pretty heavy. Very heavy, actually. “Especially with many former vegetable greenhouses being retrofitted into strawberry greenhouses, this is a challenge for the construction. Therefore we’ve designed a standing solution as well.” 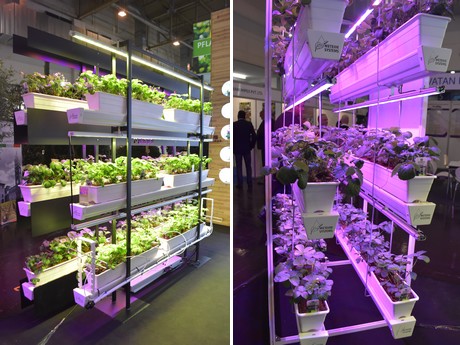 120 kg/m2
Sandro calculates the effects on the harvest numbers. “For starters we triple the amount of plants per square meter, since there’s three layers of cultivation. Then we make it possible to start a year round harvest, instead of only seasonal production. You do the math”, he laughs. “We’ve estimated it can go up to 120 kg/m2 with year round harvesting.”

The system has been in use in a Russian greenhouse project and now Parus is looking for opportunities in Europe and the rest of the world. “It can be both indoor and in a greenhouse”, Sandro concludes.

Over the next months Parus Europe will also conduct more extensive research in an indoor farm in the Netherlands to further extend their knowledge of the precise effect on LED lights and recipes on the different strawberry crop.