Harvesting starts of the first British grown cucumbers this week (from 21 January) at large-scale UK based salad grower, Thanet Earth.

Thanet Earth, located in East Kent, has six glasshouses covering around 45 hectares, which are used to grow tomatoes, peppers and cucumbers. Following the opening of a sixth glasshouse at the beginning of 2018, two glasshouses are now used to grow cucumbers. 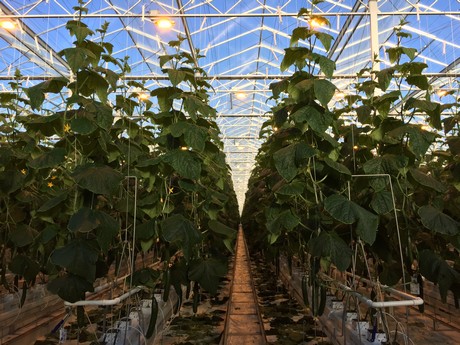 Thanet Earth have invested in growlights to extend the cucumber season as far as possible, allowing them to be the first large scale supplier of UK cucumbers into supermarkets this year. A quarter of a million cucumbers are expected to be picked in the first week after which numbers grow to peak in the summer totalling around 30 million cucumbers each year.

Arjan de Gier, Growing Director said, “We are very proud to be harvesting what we believe to be the first British cucumbers of 2019 here at Thanet Earth. We took the decision to invest heavily in growlights last year to extend the cucumber season for as long as possible, increasing the availability of British produce and decreasing our reliance on imported produce. With uncertainties in the market, including the impact of Brexit it is important to meet as much demand as possible here in the UK. But we aren’t just the first, I truly believe that our cucumbers are some of the best quality and tastiest cucumbers available.”