"Producing within 5 miles of the customer makes us 'hyper local'"

There's something else than Brexit news coming out of the UK this week. Yeeld, the vertical farm in Putney, is happy to announce that they have commenced the sustainable growing of fresh produce. 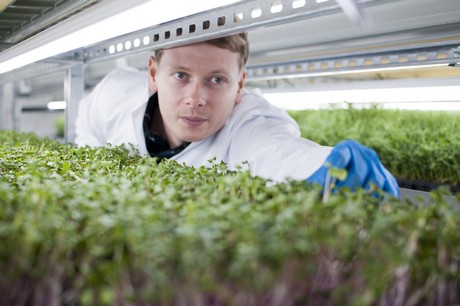 The start-up is the brainchild of ex-city trader Doug Barr who left his job as a commodities trader to tackle one very large problem.  How will we efficiently feed the next 2 billion people who come onto the planet?

To do so, Doug designed and built a vertical growing system over the summer of 2018, with initial growing trials commencing in September. "The next stage was perfecting the cultivation.  We struggled a little at first with climate control but finally managed to get the temperature, humidity and air flow just right to achieve a perfect controlled climate to grow our microgreens all year round", he explains.

Nowadays the 1000 square feet farms is lit by T5 OMNIPower strips by Mirror Lighting, which are run on 12 hours on 12 hours off cycle. "We have found this gives the best results for growing our microgreens. They are very efficient at 20 watts."

The microgreens are grown on a recycled wool medium that gives the plant roots something stable to ground themselves into. As a whole, the plants are grown in flooded water beds. The company is currently process of raising capital to expand to a 500 sq ft facility. As they expand in the coming months, they hope to increase their line of vegetables and eventually start to include fruits, namely strawberries. 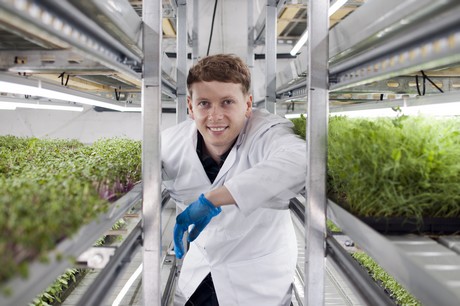 Three microgreen mixes
Yeeld is currently harvesting their microgreens, something that has been talked about extensively as wel. "We decided after many deliberations to focus, at least initially, on three different microgreen mixes. Initially we planned to offer individual varieties but felt at this early stage it would be better to focus on three solid product offerings instead of doing a small amount of many varieties.  We found very early on that each variety of microgreen has a whole host of different characteristics that either make them simple to grow or tricky."

Microgreens
Nowadays Yeeld is offering a range of microgreens to customers in London.  “Microgreens are young, immature versions of every day vegetables that you would typically buy in the supermarkets.  The main difference is we harvest them after 12 days”, says Doug.  The reason they do this, according to Doug, is because at this early stage in their growth the nutrient content is extremely dense, some studies have shown up to 40 times the difference between mature vegetables and their micro versions.

Hyper local
Branding wise, the team felt they should really lean on the locality concept to get this across to their customer base. Location is key to the Yeeld team. "First off, before going any further we will no longer use the term “local”, normal farmers have overused that word, instead going forward we will use “hyper local” which refers solely to produce grown by Urban Vertical Farms like ours and any others out there", he explains. "Most of the produce that is marketed as local will still be a minimum of 50-100 miles away from where it is consumed, assuming we are talking about central London here. We will bring that down to sub 5 miles, so you see we really are “hyper local”." 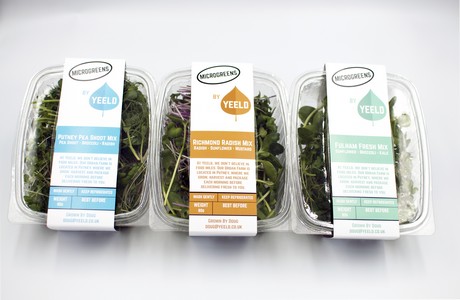 "We named each of our three mixes after a few of our catchment areas in West and South West London: Richmond Radish Mix, Putney Pea Shoot Mix and Fulham Fresh Mix. - and these will no doubt evolve as we grow.  We feel this will help to drive the image of fresh, hyper local produce that is harvested that morning, packaged and then delivered in under 90 minutes.  Yeeld is Farm-To-Table 2.0."

For more information or trying the produce:
Yeeld