The Spanish association of producer organizations ASAJA has asked for the enforcement of prevention and crisis management measures in order to prevent the collapse of the prices of some products, as has been the case for cucumbers in recent weeks. Ever since mid-December, prices have plunged - especially in Almería. 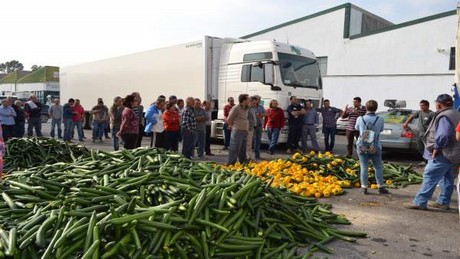 Bad times
The Spanish cucumber sector is experiencing bad times. Due to substantial production increases, growers are confronted with very low prices. The prices are particularly low in the Almería region. On 19 December the prices there fell below 20 cents per kilo, with a lowest price of 15 cents per kilo on 28 December. Although there is traditionally little movement in the cucumbers around Christmas, the price crisis for Spanish growers was already reason to deliberately destroy cucumbers. The large production and supply in the Netherlands and Belgium also led to price decreases in Northern Europe.

The problems arose because the Spanish season got going too late, after which high temperatures caused a large supply in the run-up to Christmas. "Overproduction at the wrong time", says Michael Holslag of Fruberica. "The problems with the yellow vests in France aggravated the problem."

Industry responds
For the agricultural organizations Asaja Almería and COAG Almería, the price crisis was a reason to have crisis deliberations. ASAJA plays a fundamental role in production planning, marketing and crisis prevention and management; to do so, they have tools such as exceptions to competition rules, access to aid within the framework of operational programs and the possibility of withdrawing products or not harvesting them in the event of a price crisis.

"An efficient planning of the production is essential for a good development of the campaign. The supply and the demand must be taken into account, as well as the time of the year in which the crop is going to be produced. This good planning will help prevent market saturation, with the consequent drop in the demand and its impact on prices", ASAJA stated. "If a good planning is not enough; there are other alternatives, such as the non-harvesting or withdrawal of the product. Such measures require the participation of producer organizations or their associations."

ASAJA is asking the associations of producers to implement these and/or other measures and tackle the crisis that cucumber growers are currently suffering. It also urges producers to request information from their marketing centers and Producer Organizations in order to find out what those measures are, to ensure that they are carried out in a coordinated manner, since unmonitored withdrawals will not necessarily have a significant impact on prices or boost the market demand.

"We must also bear in mind that products such as cucumbers have a short cycle, so when a grower is affected by such price drops during the harvesting period, they are likely facing a crisis that won't even allow them to cover the production costs, resulting in irreparable losses."

Stayed together
The president of Unica Group, José Martínez Portero, has reiterated his call to unity regarding the cucumber crisis. "It's not been an easy year, but the important thing is to stand together in order to sell better and minimize the risks. If we had stayed together from the start, the problems currently suffered by cucumber producers would not have been as severe," he said.

For the president of Unica, acting in an individualistic way "harms the interests of a whole sector, and some take advantage and sell cheap, while others are throwing their products away."

He considers that the lack of planning has been a key factor to explain this crisis, together with short-term problems, such as the weather and the recent protests in France.

In this sense, he said that "if the sector stood together and organized itself in cooperative models, there would be better planning. External factors would affect us to a lesser extent and we would have a greater capacity to react to them."

Good quality Spanish supply
Despite the crisis, the quality of Spanish cucumbers reaching the Netherlands is no different than usual. "Our inspections did not show that the Spanish cucumber is of poorer quality than in previous years," says Fred Jacobs of the Quality Control Bureau (KCB). "In recent weeks, no more Spanish cucumbers than usual were rejected by the KCB on the basis of the General Trading Standard. This marketing standard contains minimum requirements such as that a product must be intact, not immature or overripe and practically free of foreign substances, vermin and pests."

Royal ZON is currently auctioning Spanish cucumbers daily. Four years ago, a collaboration was started with a number of Spanish cooperatives. "Important is that the supply of Spanish product meets the same quality specifications as the Netherlands product", according to Vincent Theelen of ZON. From November to March, ZON has an inspector stationed in the Spanish cultivation area who visits the cooperatives every day and who possibly can make adjustments before the product leaves for ZON. "The quality of the Spanish cucumbers from our suppliers is excellent, so good that so far we've had hardly any complaints about it."

According to Michael, restoring prices must be achieved by planning retail campaigns in the coming period. "The weather is now stable."

Vincent saw the prices, compared to week 51, already on the increase again for the cucumbers, that are offered by ZON in three grades. "We arrange the volumes with our cooperatives on a weekly basis, so we do not have to deal with dumping products in front of the clock if production is too high." 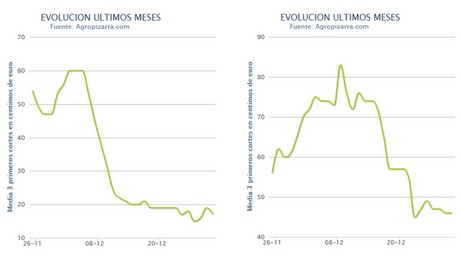 Cucumber prices at auctions affiliated with the Association of Belgian Horticultural Cooperatives (VBT) also fell in the run-up to Christmas, while the prices of the first lighted cucumbers in the Netherlands were also considerably lower than in previous years. The VBT posted an average price of 46 cents in week 51, which plummeted to 21 cents. The decline in Almería already started on 5 December when the price of 60 cents per kilo dropped in one week to 24 cents on 12 December. Spanish cucumbers made a similar decline with a low of 45 cents on 24 December, after which the decline stabilized.