Is the New Silk Road living up to expectations? This prestigious billion-dollar Chinese project has been used for several years now for transportation between China and Europe. Substantial improvements are still being made to improve the connection along the route. Despite positive results, there are still plenty of challenges for the transportation of fresh fruit and vegetables.

This became clear during the De Nieuwe Zijderoute (New Silk Road) Congress held in Tilburg, the Netherlands, last week. It was organized by Dutch transport and logistics newspaper, Nieuwsblad Transport.

With the speed of a high-speed train, visitors zoomed past several stations that laid bare the challenges facing the route. The Big Picture was the focal point of the congress' morning. What is happening? How far along are the developments? And what does the whole project mean for global geopolitical relations? Kazakhstan and China are investing billions in this project. They are pumping out stations and connections.

The EU seems to be falling behind. While billions are being invested in the East, Europe remains active at, especially, the political level. The European Union (EU) is trying to create a level playing field. According to the EU, European companies are being sidelined by China unless they have some kind of technology or techniques the Chinese can use. The EU is also negotiating the connection of rail links to corridors that the EU has previously identified. 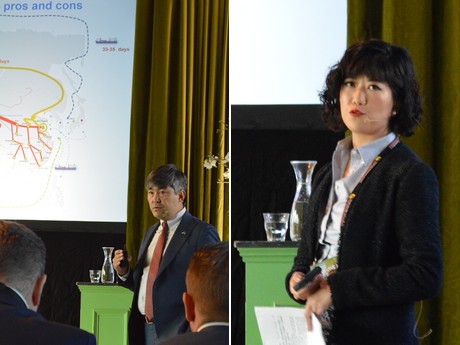 The Chinese investments have changed the geopolitical playing field. And, in a world where conflicts are increasingly being fought via economic routes, this directly affects trade. "China is on its way to becoming the largest economy in the world." This is according to Frans-Paul van de Putten of the Dutch Clingendael Institute. He expects the Chinese growth to cause a shift in international trade.

For this, he points to two factors. The first is the influence of the Chinese government on their businesses. If Chinese businesses become more active on the global stage, Beijing's influence also grows. Secondly, conflicts are being fought using economic weapons. This is evident in the trade water between the USA and China.

The afternoon's program was, possibly, even faster-paced. The focus was on the mountain of paperwork required when it comes to exporting to China. Li Jiao van Buren, Legal, Tax, and Notary showed a large number of websites that enable European companies to determine whether their Chinese partners are legitimate. Just one small hitch - they are all in Chinese.

Customs sometimes cause delays. By properly filling in the paperwork, companies can avoid unnecessary controls. Arjan Haanstra of Wilderbrook Customs & Railway Contracting pointed this out. He also shared some practical tips: Provide a clear description of the product; ensure that the number of packages stated in the documentation correspond exactly with those in the container; make note of the export document's seal number. There are very few exporters that do this but it can speed up the customs process.

En-route delays remain one of the biggest restrictions for the transportation of fresh fruit and vegetables. These occur in part because of renewals on parts of the route. The other major restriction is the Russian boycott. The first obstacle is being addressed by investments in the railway network. The second challenge is in the hands of the Kremlin.

The thoroughfare of boycotted products is, technically, allowed. This, however, is somewhat more difficult to implement in practice. Russian authorities are afraid these products will end up on the Russian market anyway. There seems to be very little that can be done to change this attitude for the time being. This means the transportation of fresh fruit and vegetables, therefore, remains difficult.

On the plus side, this means many businesses are gaining knowledge of reefer transportation. A new transport route to the East awaits European exporters. This is, however, only if the Russian border were to open, or thoroughfare becomes easier.