After decades of serving the Canadian greenhouse industry, Peter Berkhout is retiring at the end of September. Spending the last 15 years as the General Manager at Gavita Canada, Peter is about to turn off the lights for the last time. "It has been a great pleasure to work in this industry, but now it's time for the new generation to take over." 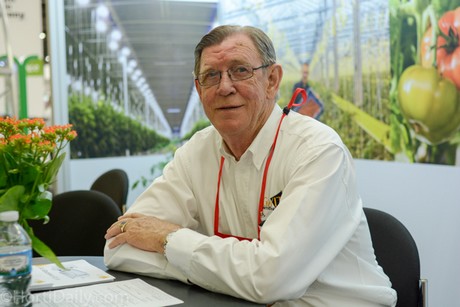 Peter Berkhout at his last Cultivate in Columbus, in July this year.
There are not many people in the North American greenhouse industry who do not know Peter Berkhout; he was involved in introducing the first HPS supplemental greenhouse lighting into the Canadian greenhouses since the mid eighties, when he started the North American division for Poot Lichtenergie, nowadays better known as P.L Light. In 2001, Peter and his son Ron started the Canadian branch of Gavita, at that time known as Kavita Canada.
The Dutchman came to Canada in 1973, when he emigrated from the town of Warmenhuizen to Canada at the age of 26. It was the aftermath of a visit to his uncle in St. Catherines, Ontario. "The wide open spaces and the freedom is what attracted me the most. And it still does today."
His first years in Canada were spent in greenhouse construction at companies like Paul Boers and Canadian Greenhouses. In 1984 he continued his career with a focus on greenhouse lighting when starting the Canadian branch of Dutch horticultural lighting supplier Poot Lichtenergie."
Peter recalls that time as a period of pioneering. "The industry was much different than it is today. You basically sold lights and that was it. You worked on a base of trust that the light was sufficient to grow a good product. Nowadays everything has changed, there is much more knowledge on light available and things are way more serious. You work with computers, things are more advanced, more complex calculations and if you say that a light delivers 200 umol/m2/s, a grower will check that into detail. Also competition increased. But what never changed is that when you are good to a customer and you give him the right service, they are loyal to you too."
In 2001, Peter started a new adventure when he started the North American division for Norwegian supplemental lighting manufacturer Gavita. Together with his son Ron, he served the emerging greenhouse industry. Peter served the flower and produce growers and Ron became more and more involved in the marijuana space.
Now, after spending more than 33 years in horticulture lighting, Peter calls it a day. He said that he enjoyed being part of the evolution that he saw in lighting. "And most of all, horticulture was a great industry to be part of. I enjoyed the atmosphere, it is a very friendly industry in which I made a lot of friends. At trade shows it was always 'gezellig'. It is an industry with a fantastic atmosphere and a great sector to work in."
Peter is not sure what he is going to do now that he is retired. "First we go to Holland for a two week vacation. And than I am happy to go back home to Canada again." Perhaps to enjoy the wide open spaces and its freedom?
Peter will be in the office till the end of this month and can be reached at
peter.berkhout@gavita.com