US: More light and production output with unique greenhouse columns

Building greenhouses in areas that do not have much light available was a big trigger for greenhouse manufacturer BOM to design a structure that allows more light into the greenhouse. The column of their Twinlight® greenhouse consists of two narrow, thin uprights rather than a large solid tube. This allows more light inside and less material is needed. BOM Group's Ton Versteeg gave us an update on the recent project they built with the Twinlight substructure.

According to Versteeg, the Twinlight® structure is also becoming popular in North America, as growers can realize higher production outputs against lower energy inputs. "At this moment we are building a 2.5 hectare turnkey project with a Twinlight® substructure in Pennsylvania, near Harrisburg. The greenhouse project will be completed in December and will be used for the cultivation of organic tomatoes that will be marketed by Whole Foods. 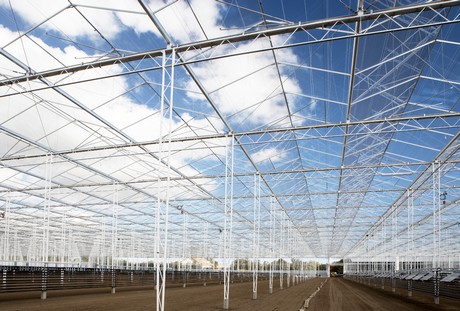 The size of the cultivation area inside the Twinlight® structure remains the same because the bottom of the downward-tapering column is not wider than the dolly. The top of the custom upright has the same width as the truss so that the screen always seals properly. The innovative Twinlight® substructure with its smart cross-connection makes a taller greenhouses possible at a more competitive price. And best of all realizing a more consistent cultivation climate. 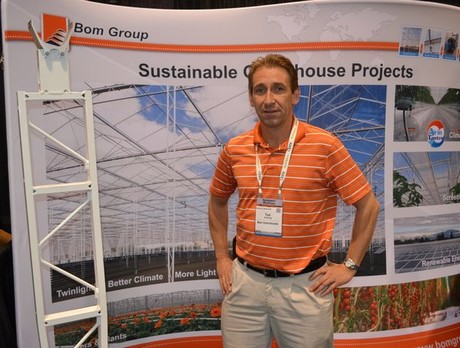 Bom Group's Ton Versteeg at the PMA in Anaheim last month. On the left you can see the patented Twinlight® greenhouse column.

Ton Versteeg was at the PMA in Anaheim last month. Just like last year, he told us that their presence at the PMA show was of high importance. "Exhibiting at the PMA gives us the possibility to meet decision makers on the trade show floor. The opportunities are here as the North American greenhouse growers are continuing investments in retro-fitting and expansions. Last year we started to build two projects via contact that we established at the PMA.