This May Anders Ludvigson, Svensson’s Executive Vice President, set out with a small film team to explore some of the climates where his textile products are used – by commercial greenhouse growers. His micro-adventure takes him first inside the Arctic Circle and then to part of the Californian desert. In both regions his climate screens are used to reduce energy and or water consumption in horticultural operations. 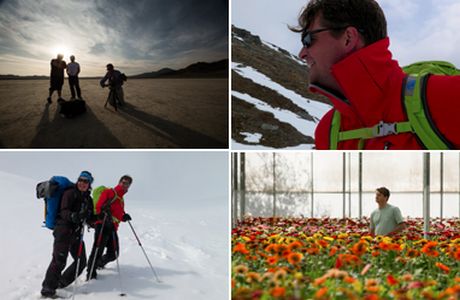 A message to the growing industry and the world at large
The purpose of the film is to raise awareness for a problem that will soon affect us all in some way: society needs growers to produce more food using less resources. Anders Ludvigson believes better growing can help, and he is on a mission to do what he can to make it happen.

‘‘ Together with our partners, we’re trying to create a working environment where the common goal is better growing – growing in ways that are efficient with natural resources … and lucrative for the grower,’’ says Anders Ludvigson.


Facts and figures about the film:
The idea of walking
Anders Ludvigson’s work takes him to many different parts of the world where he often goes out walking to get to know the area and climate he is visiting. The helicopter seen in the film was only used to get to the Kebnekaise mountain station, from this point everybody was on foot. In California, a quadcopter was used for filming on the dry lake bed and inside the greenhouse.

Footage from Walking in a Grower’s Climate


Arctic Circle
Anders Ludvigson spent two days walking on the Kebnekaise massif (Sweden) – May 6 & 7. When he delivers his message he is standing on Björlings Glacier, 1,550 m above sea level. Temperatures ranged from -12 up to -3 degrees C.

California
A week or so later his micro-adventure continued with two days walking in the Mojave Desert, California – May 16 & 17. His message is delivered walking across a dry lake bed, 1,530 m above sea level. Temperatures ranged from +20 to +32 degrees C.


About the exhibition launch: Five names for a better climate

At Greentech in Holland and at Cultivate14 in Ohio this summer, Svensson will introduce its new climate family concept. This divides the wide range of climate screens into five user-friendly families. These make it easier to choose the right screen – increasing efficiency for the grower’s operation. The names of the five families are: Harmony, Luxous, Obscura, Solaro, Tempa.