Horticulture could see Greece out of crisis

For Greece's Secretary General for Agricultural Development and International Relations, Dimitris Melas, the way out of the country's economic lies with the agricultural and horticultural sector. With that in mind, he was recently at a Fresh Produce Ukraine in Kiev to promote trade in the area.

“We want to establish relationships in Ukraine and the Russian Federation because it's a big market that has a good idea of the quality of Greek products,” said Melas. “The effort is to promote and foster exporting for our producers and encourage importers from Ukraine.” Melas noted that because the quality of Greek products has never been in question in the area, there are many opportunities for Greece businesses to do well there, and now that growers are making improvements to their operations, those opportunities will only multiply. In fact, he said that this improvement drive has been one of the few good things to come out of the recent economic crisis. 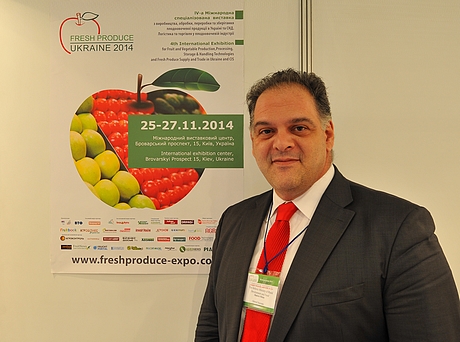 “Many good things have been revealed,” said Melas. “Producers are collaborating and exporting together, more so than in other years, and it's shows very good results.” They have also been standardizing their processes and making improvements to streamline production.

“Producers are now looking for new methods to get better products, better quality and more shelf life,” said Melas. The government has been doing what it can to encourage those efforts, such as directing funds to growers and fostering relationships with institutions throughout Europe that can help with production, marketing and management.

“I see it day by day, there is a very big rate of development,” said Melas. “Half of all varieties of fruit and vegetables that are grown in Europe can be grown in Greece, so we are turning that into a strength. It's something we must do, and we will do it.” One of the problems growers have typically had is that the country's geography makes it hard to establish large, unified growing areas, so the large number of growers spread out over a variety of terrain has made unifying efforts difficult. But now that growers have banded together throughout the economic crisis, Melas thinks there is a bright future ahead.

"Consolidation of individual growers into into well-organized producer organizations will play an important role for the revival of Greece's green industry. We need to strengthen forces in order to work as efficiently as possible, to save costs and to share our knowledge. As well as this, we will pay more attention to research, and of course as the Secretary State General of Agricultural Development, I will deploy myself for our farmers, growers and the entire fresh produce chain."

Melas mentioned also the investment potential for investors that are luring to new industries. He named the greenhouse horticulture sector as a big potential industry. "The north of Greece has a lot of potential for modern greenhouse horticulture. Already several investors have set up impressive greenhouse projects there over the last few years." He named the use of geothermal energy as a big advantage. "The heat is there, so the production costs are very low for greenhouse vegetables. Next to this there are many local workforces available. The Greeks are motivated to work in greenhouses, more then ever. This is reflected in the spirit of our country and the government's policies. We want to get out of this crisis and show the rest of the world what we are capable of it!"