Last week, one of the largest events for Mexico's agricultural and horticultural industry took place; the AgroExpoalimentaria Guanajuato, held in the city of Irapuato, close to the well known greenhouse hub of Querétaro. The event lasted from Tuesday, November 12, and the trade show floor was packed with a large number of visitors up until late Friday evening. HortiDaily.com was also in Mexico to make a photo report and become acquainted with the Mexican greenhouse industry. We had the chance to meet many greenhouse growers, suppliers and industry boards and by visiting a keen selection of greenhouse operations, we were able to learn that the Mexico of today can be seen as one of the most progressive and developing horticultural industries. The Mexican farmers, who are primarily growing for and exporting all of their greenhouse produce to major U.S. greenhouse growers, are currently very eager to adapt new techniques, varieties and achieve excellent quality and production figures.

Visiting the greenhouses, it was impressive to see how environmentally friendly Mexican growers are working, and how different the mindset is compared to Western-European, U.S. and Canadian greenhouse growers. They are dealing with the same, or even higher, quality standards, varieties and the High-Tech growers are also looking to growing with techniques like CO2 dosing and even co-generation. Even though they are growing in a different, warmer and more harsher climate, they are perfectly aware of steering their crops with heating systems and ventilation as tools. The biggest difference there is that the labour is by far cheaper than in the U.S, Canada or Netherlands. Due to this, a lot of sorting, packing and other work is done by hand. To give an example; in some cases it is more profitable to pollinate tomato crops by hand in stead of using bumblebees, simply because bumblebees are more expensive.

However, just because Mexico is using more manual labor doesn't mean that they are not high tech. Greenhouses are top of the bill and the growers are eager to use new methods and techniques. For example; there is a huge demand for grafted crops, awareness of rootstock choice and the growers are always looking to improve varieties, they are not afraid to make the switch to a different variety each season, unlike Dutch growers that usual stay with the same variety for more years. Overall you can say that Mexicans are less conservative.

This spirit was also reflected during the trade show in Irapuato that was held on an acreage of 32 hectare. Growers where checking out new varieties, supplies and techniques. Exact figures are not available yet, but it seems that the trade show attracted over 90,000 visitors and that there were a total of 1,000 exhibition stands. There were open field agricultural trials located next to the trade show floor and trials where divided in three segments for greenhouse growers; low tech, medium tech and high tech. Each seed breeder had multiple demo greenhouses and the high tech crops that were displayed, were propagated with latest innovations such as coir starter blocks and peat foam plant plugs.

The largest segment of exhibiting suppliers were local enterprises or their Mexican representatives. Next to this, a Dutch pavilion was available, just like a French pavilion. The Dutch and the French greenhouse constructors and suppliers are currently involved in major greenhouse projects at the Agropark greenhouse cluster in Queretaro, an area that is founded as the result of a cooperation between the Dutch and Mexican governments and institutes. According to the Dutch ambassador of Mexico, Dolf Hogewoning, there currently still is a lot of government networking between the two countries. He said that the Agropark Queretaro is a good example and foundation for more food production clusters in other states in Mexico. The current government underlines the need for food production in Mexico and in combination with the low cost of labor, there is a huge potential for more of this type of horticultural projects in Mexico.

We will be featuring several reports on our visits to Mexican greenhouses and interviews with other entrepreneurs in this thriving horticultural industry in the upcoming weeks.

For the time being, please have a look at the photo report we made at the show, there are more than 360 pictures, so sit back and enjoy. 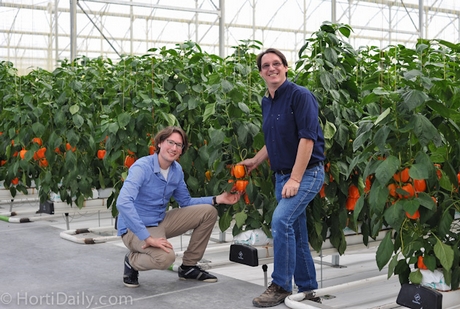 Tip: If you are looking for your picture and do not want to scroll the entire report, you can use the search function on the photo home page, by entering your name or company name.