Ellen Beerling, Wageningen UR at the British Tomato Conference

E.U. directives concerning nutrient and pesticide emissions that will come into effect will force growers to look at both the quality and quantity of their water discharges. A talk by Wageningen University's Ellen Beerling at the British Tomato Conference last Thursday described the benefits of cleaning up water discharges.

Data from Dutch water boards showed that the areas in the Netherlands with concentrated greenhouse horticulture showed that there are high emissions of pesticides and nutrients. In the greenhouse areas like The Westland or Bleiswijk, the nitrogen concentration in the water is exceeding, by over 5 times, the standard for good water quality. Regarding pesticide emissions it is more or less the same situation. The Dutch government is aware of this and states that there should be zero discharge of nutrients and pesticides in 2027.

“There are legislative reasons growers should pay attention to this issue, but there are also other positive reasons,” remarked Beerling. The legislative ones were made clear by the European Union. Directives that go into effect in the future dictate minimum standards for ground and surface water for greenhouse growers. The goal is to steadily limit the amount of nitrogen, phosphorous and pesticides, among other substances, allowed in water discharges. Current legislation hopes to bring nitrogen and phosphorous emissions in water discharges from greenhouses down to zero by 2027. This might seems impossible, but a study done by Beerling's team shows that there's a big disparity in emissions among the growers with the biggest emissions levels and those with the lowest levels, so there's certainly much room for improvement. Her talk focused on the ways growers can make improvements. 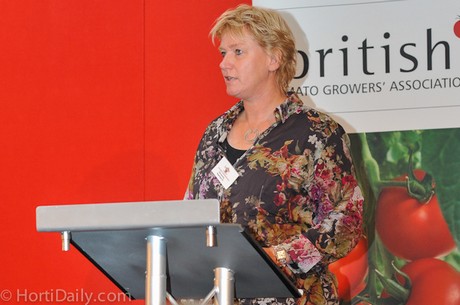 Beerling showed that specially designed Nitrogen emission standards vary amongst different crops. "This is the first year that Dutch growers need to meet the nitrogen emission standards. In 2013, a Dutch tomato grower is allowed to discharge 125 Kg Nitrogen per hectare, in 2015 this will be 86 kilo and it will reduce over the years towards zero." A Phalaenopsis greenhouse is allowed to emit 300 Kg of Nitrogen per hectare in 2013, in 2015 this will be 200 kg and in 2027 zero Kg.

The government knows this will be difficult, especially for the pesticide emissions and they will have to put some effort in it just like the growers. That's why they decided that water purification technology is now mandatory if you want to use pesticides.

“In the Netherlands, it takes 50 litres of water to grow one kilogram of tomatoes in a greenhouse,” explained Beerling. “But in a closed greenhouse system, we know we can bring the amount of water necessary to grow that kilo of tomatoes down to 5 litres.” She brought up those figures to stress the point that limiting water discharges can have a big impact, both from an ecological and a monetary standpoint. Fewer discharges mean less emissions in the first place, which means less money spent on water and nutrients delivered via water solutions, and it also means fewer opportunities for nitrogen to escape into the ground water.

“There are certainly reasons for discharging water, the biggest one being the accumulation of sodium,” said Beerling. “For many years this was the main reason for growers, they wanted to keep the sodium levels as low as possible. Next to this technical failures, imbalances in nutrients are also reasons for discharging." Growers often discharge water to inhibit the growth of bacteria and diseases in their water supply, and Beerling noted that many times a grower will throw out water out of fear that there's something unwanted growing in their greenhouse as opposed to a real threat. Again, Beerling stressed accurate monitoring of the water supply, both for pathogens as well as to make sure there's a correct balance of nutrients, since a nutrient imbalance is another oft-cited reason for dumping water. But when water is dumped because of a nutrient imbalance, Beerling noted, the money invested in that solution is also dumped.

“Reducing you water footprint will save water, bring down emissions and saves a lot of money,” said Beerling. “Good maintenance of purification and disinfection equipment will be very important.” She suggested growers can decrease the need for water discharges by checking water filters often and flushing them with rainwater. For growers who dump water because they fear unwanted substances or diseases in their water supply, she suggested advanced oxidation, which has been shown to help prevent growth inhibition and can give growers peace of mind. Equally important, she added, is that growers think about the effects, both on the environment and the bottom line, of discharging water.

Other quick wins are re-using back flush water by use of sand filters, reverse osmosis, an extra buffer silo and disinfection equipment. Also with smarter nutrition methods, growers can reduce emissions as they are can be more aware of imbalanced nutrient ratios by frequent lab analyses and adapting dynamic irrigation.

“The first and most important step in reducing emissions is to be aware that emissions have an impact, you need to see the necessity,” said Beerling. “From there growers can gain experience on how to achieve zero-emission in soil-less cultivation, exchange information with other growers and learn from each other."