By now, you've probably heard of those curious pink greenhouses with energy-generating glass. A scientific breakthrough for sure, but what's the practical applicability of it? And how does it work exactly? We spoke to Michael Loik, of the Loik Laboratory in the Environmental Studies Department at the University of California, Santa Cruz, to find out. 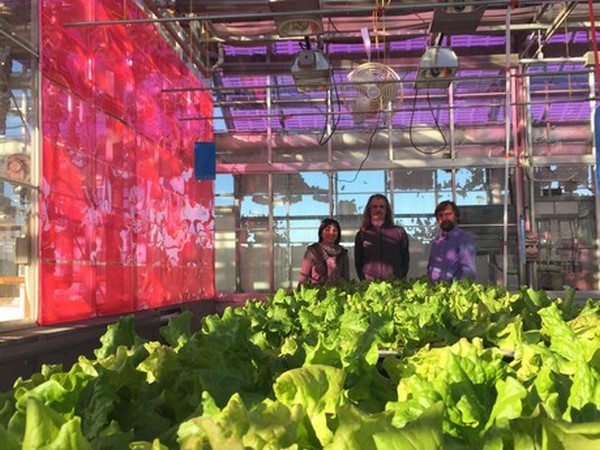 Michael explains that the dye in the glass captures energy from the green and blue wavelengths of sunlight. The energy is transferred to the thin solar panels that are embedded in the glasshouse roof. Thus, some of the light passing through the glass is diverted to electricity production. The rest of the light that passes through the glass is used for powering photosynthesis by plants growing in the glasshouse.
But why pink? "That is because of the dye that was selected to allow the red wavelengths of sunlight to be able to pass through", Michael says. "Colors that are not absorbed by the dye are reflected or transmitted. In this case, the dye absorbs green and some of the blue. The blue that is not absorbed, as well as the red wavelengths of sunlight, are transmitted or reflected (red + some blue = magenta)."

Photo courtesy of Michael Loik
Yield increase
So, would it be an option to use different-colored glass, much like using light recipes to impact crops in different ways? Probably not. "Different colors would absorb in different regions of the visible spectrum and may take away the red wavelengths that plants prefer. Thus, other colors may not be as good for photosynthesis by plants under the dyed glasshouse windows if they were another color."
Still, the dye does more than just let the red light through. In 2012, Michael's colleague, Dr. Glenn Alers, started Soliculture to commercially produce the technology as the LUMO Greenhouse. Glenn explains: "The dye uses a quantum conversion process to convert green light to red light, therefore amplifying the light with the highest photosynthesis efficiency. The transmission of the panels in the red (most important for plant growth) is 120% from the light amplification process. Reduction of the green light reduces stress on the crop resulting in lower leaf temperature, greater disease resistance and greater crop yields. Trials in commercial greenhouses have demonstrated up to 10% increase in cucumber yields and 50% yield increase in leafy greens like lettuce and herbs."

Photo courtesy of Glenn Alers
Dual-use: more cost-effective
According to Michael, the energy-generating glass is comparable to the cost of conventional solar power on an area basis. "But this method becomes more cost effective if one considers that it is dual-use, i.e. it is used for generating some electricity for the glasshouse's own needs (fans, data collection systems, etc.) at the same time as growing food."
Another added benefit of the energy-generating glass is that it helps save water. That's because the air temperature inside the glasshouse is slightly lower due to a lower energy load, so there is less evaporative demand inside the cooler glasshouse.

Practical use
Energy-generating glass thus sounds like a win-win situation, but there are some practicalities to think of before you install them. For instance, the use of climate screens may not be compatible with using the dye. "If they reduce incoming light intensity too much they could reduce photosynthesis and plant production", Michael says.

Photo courtesy of Glenn Alers
Geograpichally speaking, the glass should be suitable almost anywhere, but as always there are trade-offs between brighter locations at lower latitudes (higher cooling costs) and higher latitudes (less energy in the solar beam).
Professional growers can already use the glass, and the panels are currently being installed in several acres of greenhouses in California and Ontario by Soliculture.
For more information: