Yesterday saw the opening of one of the largest automated plant factories with artificial light in Europe. In Waregem, a city in the south of Belgium, start-up Urban Crops opened an impressive facility.

Urban Crops is the brainchild of the young Belgian student Maarten Vandecruys. Backed by the capital of the Belgian entrepreneur Frederic Bulcean, he saw his dream come true; creating an efficient and sustainable commercial farming model that enables the growth of food crops in any place in the world, in any climate and in any setting. 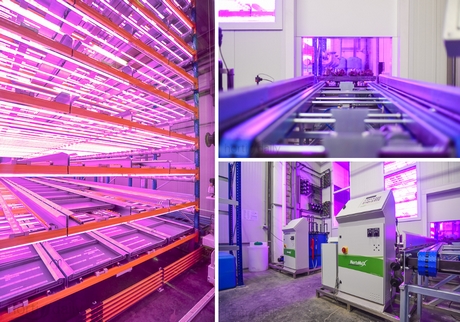 Founding Urban Crops is right on time; vertical farming has become a well established industry on its own, especially in the U.S where you can find many start ups growing food crops like leafy greens and culinary herbs in a multi-layer setting. Inspired by this, and the many robotized plant factories with artificial lighting (PFAL), which have been present in Asia for a number of years already, Urban Crops developed their own version of the concept. With the opening of their demonstration factory in Waregem, the group now has a place where investors can see what is possible with their technology. They hope to export the systems all over the world. 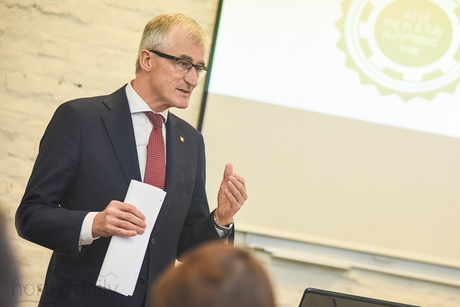 At the opening Minister-President of Flanders Geert Bourgeois praised the entrepreneurship of the youngsters of Urban Crops.

During the opening, the demonstration site of Urban Crops was open for the public. We visited the huge automated plant factory that is built as a climate chamber with a completely closed controllable environment; only a robot has access to the crates in which small seedlings are raised to fully grown crops.

Inside the climate chamber a large installation with 8 cultivation layers is installed. What makes is different from other PFALs is that Urban Crops uses its own type of crates instead of eb and flow benches or (NFT)-gutters. Each layer has place for 4 rows with crates, and each row has a length of 18 meters with its own supply of irrigation and CO2. In this current setting, the demonstration PFAL has a capacity to house 448 crates. With 10 crops per crate, this results in 442 crops to harvest each day.
In a commercial setting, the system can be built with towers up to 25 layers of production. With 30 of these towers a production of 126,000 crops per day can be achieved. 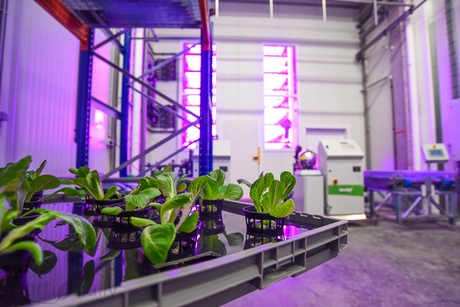 The PFAL has only one entrance; a conveyor belt via which the crates can enter the chamber. Thanks to RFID technology in the crates, the software program and the two robots that pick the crates from the conveyor belt, know exactly in what kind of stage the crops in the crates are and how to handle and where to place them.

For the development of this PFAL, Urban Crops was definitely inspired by the numerous plant factories in Asia. As well as this, they must also have watched other entrepreneurs in the United States who have achieved good results with similar technologies over the past few years. For the LED technology they went to the Far East and for the water management, fertigation, irrigation and purification they got help from specialists at Dutch horticulture automation supplier HortiMax. 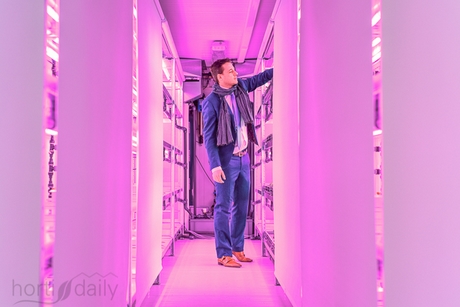 Besides the large Plan Factory concept, Urban Crops also developed two container farm concepts; Farm Flex and Farm Pro. With these systems they target not only small scale, but also efficient food production in urban areas. Also the container farming concept is not new, but Urban Crop's container system is what makes it different from the current offer. The Farm Flex container is a container farm that requires manual labour, while the Farm Pro is fully robotized and looks more like a PFAL inside a shipping container.