"This could bring in a new era of plant growth optimization, like the climate computer did back in the days"

Last week, Paskal Systems presented the Growth Analysis System: a monitoring system, based on wireless weighing units that enable the user to observe and analyze a spatial and comprehensive overview of greenhouse performance and crop growth rates. Last year, the first tests and trials immediately bore the first tangible results, presenting great new advantages for growers; observable growth retardation up to twelve percent. "This could bring in a new era of plant growth optimization, like the climate computer did back in the days," was one of the reactions from a leader in the industry.

The main objective of the “Growth Analysis System” is to optimize crop management for maximum profit. Precise and accurate crop weights are recorded and the data is transferred to the data processing system on a continuous basis. The first trials took place over the last few years at leading research stations and, since 4 months ago a trial is running at an 8 hectare greenhouse in the Netherlands. After a few weeks, Paskal's software delivered some very interesting first results.

In each row there were installed 8 units per row in a total of 24 rows, 4 units on the left side, and 4 units on the right side. The computer model registered a difference between the growth of the rows left and right side that was up to 12 percent, probably due to natural shading. It is an example for potential improvements that the measuring give. This very detailed overview will help the grower to optimize the growing strategy. "The system is very accurate," said system development manager Omri Morag. "The noise that is registered by the work on the crop or other influences is filtered out very carefully, so we will strictly register the actual plant weight. Designated software analyzes the recorded data and displays the actual growth curve. In addition, the program creates a statistical model that calculates a growth curve and the interaction between growing conditions, taking the specific growing conditions in the greenhouse into account. Next to that it is a very handy tool for growers to predict upcoming harvest or even to save energy." 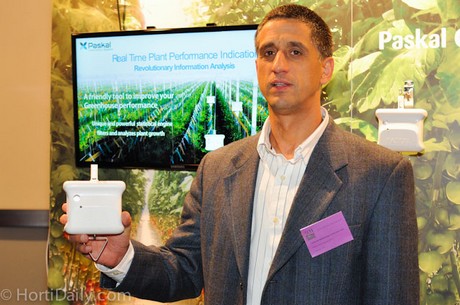 Paskal will officially launch the system on the commercial market in July this year. Omri: "We are now fine-tuning the platform. Our standard systems shall include 100 weighing units, which will allow the grower a sufficient statistical sample and the ability to split the units to different compartments or control zones and to compare between them. The minimum number of units which can be used is 25, but this number cannot be split to different control zones.The standard system will be adequate for greenhouses as big as 10 hectare." 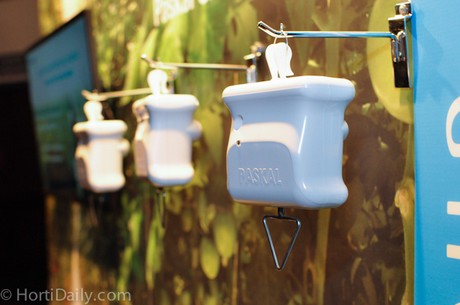 As one of the leading manufacturers of greenhouse supplies like crop supporting plastics, clips, twines and hooks, it might be a bit strange that Paskal now is developing technical crop management systems. "Maybe strange, but there is a logical explanation for that," said the company's managing director Tzvika Avigdor. "For over 20 years we have been one of the main suppliers of crop hooks. We were constantly focusing on improving the hooks, until somebody suddenly said: 'The hook actually holds the weight of the plant. If we could just measure this weight for every plant and collect these measurements, we could create a database which is like the pixels on the sensor of a camera. That is one of the main reasons that we started to develop this system. Unfortunately it would be too expensive to measure every single plant precisely, but eventually we worked out a working sample that gives a very accurate overview of the actual crop growth inside the greenhouse. So it all started with the hook, and now results in Paskal being a company that provides growers with more solutions then just hooks or clips. We hope that with these systems we can get more involved in the process of growing and support the growers facing the challenges of improving their greenhouses performances."

For two years the team behind Paskal's new control solutions division, Paskal Systems, was working on the Growth Analysis System. "When we started off there were some major principles that had to fit in the weighing system," said Omri. "It had to be a flexible part of the trellising system. It needed to be moveable and very handy, so it would not be obstructing the greenhouse workers in doing their job. That’s why we designed an ergonomic unit, that is very easy to handle, the hooks fits in very easy and it fits very naturally in existing trellising systems. It's robust, because, at the end of the day, it has to be a part of the routine for the work. Aside of that, it can resist temperature differences 10 to 45 degrees Celsius without the need of resetting or calibrating. It is very accurate for the complete season. That was one of the challenges we had to overcome when we started with the idea." The team of Paskal Systems at Horticultural Relationship Days in The Netherlands: Yair, Elie, Omri and Tzvika.

Another challenge for the development team of Paskal Systems was the search for a stable way to transfer the data from the weighing unit. "The wireless system is specially developed for the use inside a greenhouse," Omri said. "It is based on a two-way radio system that uses a frequency of 169 Mhz. The advantage of this is that it can easily cover 10 hectare. Because it is a two-way system, it ensures that communication is very efficient. There was not such a wireless system invented for use in greenhouses until now. The communication is supported by a receiving unit that is connected with a database computer which is in line with one of our servers to generate the data. In a triangle, there are two repeaters installed in the greenhouse that ensures that there is a non-stop reception with the receiver. Because it is in a triangle, we are sure that there will always be a stable connection, even if the units are moving or disappearing behind the poles. Also for the maintenance of the units, it enables full control."

The units are powered by built in batteries that will last for at list 5 years. After that the units can be refurbished easily by a technician.